Research Initiative on the Economics of the Middle East

The Programme for the workshop may be accessed through the following link: https://rieme.org/programme/

The Transmission of Knowledge:
Examples from Classical Arabic Medicine

In Greek humoralism, the cause of illness is explained as a disturbance of the natural balance of the four bodily humors. This theory formed the unchallenged basis of classical Arabic medicine. Using text examples from one of the most influential books in the history of medicine, Ibn Sīnā’s Canon of Medicine (completed in 1023), we will examine the theoretical framework of the Canon and how it is reflected in recommendations for medical treatment. The translators of the Greek medical texts faced serious difficulties and we will look into how they solved them. The talk will conclude with some medical scenes from Arabic manuscripts that show the challenges involved in the transmission of medical knowledge. 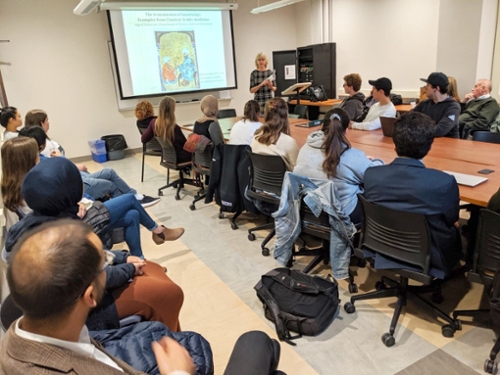 A look at Muwatta’of Malik b. Anas as evidence for the willingness to use economic reasoning in the law, and the efficiency-enhancing nature of Islamic law.

Feyzi Baban is working on two SSHRC funded five year research projects. The first project investigates why, how and under what conditions some communities in various European countries are more open to cultural difference than others; what types of projects facilitate openness to newcomers and how do citizens and non-citizens participate in these projects in ways that transform understandings of citizenship and belonging. The second project studies humanitarian assistance to Syrian refugees and rights claims emerging from legal, political and economic precarious conditions Syrian refugees face in Turkey.

WHY IS IT SO HARD TO MAKE SENSE OF THE MIDDLE EAST TODAY?
REFLECTIONS OF AN HISTORIAN
Friday, March 11, 2016
18th Annual Graduate Student Conference

The talk addressed the recent developments in the Middle East and reflected on them in light of the two research projects I am conducting: “Women in Islamic Law.”, and “Structural change and economic development in the medieval Middle East.” The research projects may be accessed through the following link: https://www.medievalislamiceconomy.uwo.ca

The signature weapon in recent conflicts in the Middle East is the Improvised Explosive Device (IED). When it is directed against individuals it is known as the anti-personnel IED. Dr McAlister and his colleagues cataloged injuries caused by this device. They demonstrated how the injuries are much worse than those seen with conventional anti-personnel landmines, against which the Ottawa Treaty was designed. McAlister and colleagues report that was published in the British Medical Journal demonstrates that use of the Anti-personnel IED might be a war crime.

About Dr McAlister:
Dr McAlister is a general surgeon, at University Hospital London, with special interest in hepatobiliary, endobiliary, transplant and combat surgery. He is the Angus D. McLachlin Professor of Surgery at the University of Western Ontario. He was a regular force member of the Royal Canadian Medical Service, Canadian Armed Forces, (rank Lieutenant Colonel) and has deployed overseas many times. His research interests include fundamental and clinical research in these areas as well as their history. He has been president of the Canadian Society of Transplantation and the Canadian Organ Replacement Registry. Dr McAlister was a member of council of the Royal College of Physicians and Surgeons of Canada and was chair of Region Advisory Committee (RAC) 3 (Ontario and Nunavut) of the Royal College. As editor-in-chief, he increased the Impact Factor of the Canadian Journal of Surgery fivefold. Dr McAlister was awarded the John McCrae Memorial Medal by the Canadian Medical Association and the Lifetime Achievement Award by the Canadian Association of Transplantation in 2019.

The health situation in Gaza has experienced a sharp deterioration in the past decade. In this talk, Dr. Tarek Loubani examines the rising health needs and the impact of the blockade and several wars on the ability of Gaza's health system to cope. Dr. Loubani is an emergency physician working in London, Ontario and volunteering in the Gaza Strip's Al-Shifa hospital.